Oh-e Sensei always started with slow and long movements, then progressed into Technical performance. I have heard many people say that Uke-Nagashi was one of his specialities.

These are a typical examples of the Oh-e Sensei method which is distinctly understandable. His aim was to perform Kata with large movements rather than slow ones. In my opinion he did this purposefully to allow students to see and understand the logic of forms. There were always questions concerning the slowness of movement which Oh-e Sensei created. Some teachers said that it was simply the differentiation between two great Masters.

As a point of interest I first noticed this way when I was a pupil at Kochi Junior High School. However it was not until fifty or sixty years later that I came to the conclusion to agree and obey the Oh-e basic method. If there is a different method or opinion, I would simply consider it as such.

In other words, there are no observations that I can consider as either right or wrong. I was brought up in Kochi City (Capital of Kochi Prefecture), and with that I had never had serious doubts about the methods of Oh-e Sensei. However today, some sixty to sixty-seven years later I must confess that I am greatly influenced by his opinions and way of life.

I would like to comment on the Disagreement between the two great men Master Oh-e and Master Nakayama Hakudo (Of Kendo fame).

I think that this disagreement must have been created due to the differences of style and age. My own opinion is that Oh-e Sensei was influenced by Hamaguri Gomon no Ikusa (The Clam Gate War) which took place in the Kyoto Imperial Palace between 1865~67 at the end of the Edo period. Also because he expended exceptional energy and effort in instructing fundamental exercises and training.

For some reason we can find a strange but similar logic in Gorin-no-Sho (Miyamoto Musashi) which states that, The stroke of cutting is exceedingly important. It must be done by stretching the elbows and swinging downward with as large a movement as possible . This is the correct way to cut methodically and technically. It is also written, If the sword user hurries his action, the cutting line will fall short. Even shorter than if one is using a Wakizashi. It seems to be very mysterious to find a similarity between Miyamoto Musashi and Master Oh-e.

Also the two great Masters were said to be big and strong. They seemed to have a similarity in attitude method and opinion. Master Nakayama not disagreeing with the methods of Oh-e Sensei could have been the result of a personality clash.

ALL OF HIS MOVEMENTS HAD TO BE PERFORMED STRONGLY AND SLOWLY :

There must be some people who consider this movement as childish and immature. However analytically, if the practitioner keeps repeating the same action, his speed will increase automatically. Nevertheless it is important to bear in mind that an intentional increase in speed should be excluded. As a matter of fact, Lately I often see Instructors and students hurrying to teach or learn a higher level of movements and techniques which ruin basics. I therefore firmly believe that a teacher must not force students to rush their progress in speed and technique.

DO NOT FORGET ANY TECHNIQUE

ATTACKING AND DEFENDING HAS ITS OWN KAMAE :

We must never forget that the techniques of Oh-e Sensei - Nukitsuke, Kiritsuke, Noto - all have their own separate Kamae, spirit and movement.

a) When you decide to begin your action, you should be looking at your opponent with full fighting spirit. Even whilst still in Seiza posture, one must mentally prepare for Nukitsuke action.

b) When taking Nukitsuke action, one must pressurise the opponent by producing attacking pressure with the Tsukagashira.

c) Furikaburi action : The Kissaki must be brought up under the left ear with a thrusting action. At the same time when the right hand reaches eye level, the left hand must grip the Tsuka to raise the sword above the head. At this stage the shoulders should be square and the chest straight and expanded.

d) After Kiritsuke bring the right fist to the right temple with a full attacking feeling. This action precedes Chiburui.

e) Chiburui : Standing, bring the left foot to meet the right foot with a still attacking spirit. The sword must swing through above the head to the front of the body to finish - Kissaki position is to the right front of the body which is in Iai-goshi (short sinking posture)

f) Then start to take Noto action : In our style Jikiden, we bring the right foot back about a step and a half, bending the left knee slightly, but keeping the right leg fairly straight. (A kind of Iai-goshi).

g) Next Noto : In kneeling on the left, lower the knee straight downward to the floor very carefully - looking at the opponent with full fighting spirit. Even after these actions, still take a few moments in Zanshin. 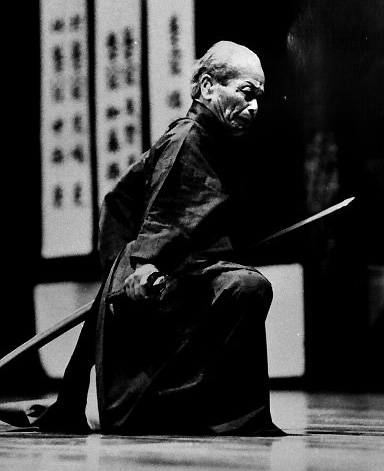